Henry's locked in his apartment and can't get out. Bless. 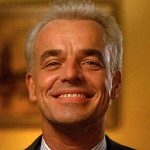 All the hauntings were annoying, but for different reasons.

When my friend and I played, the first one we got was the crazy ticking clock. We just left the bedroom and heard distant ticking. The clock was literally the last place we looked, because we couldn't figure out where the hell it was coming from. I thought it was pretty crazy, though.

From there, there were a few that blocked off imporant parts of the apartment (eg. the save point, the chest, the bed), but I think the most annoying had to be the victim crawling out of the wall, which would hurt you NO MATTER WHAT ROOM YOU WERE IN. I mean, the laundry room is really tiny and just serves as a portal to where there are more life damaging enemies anyway, you're practically losing health for no reason, which is a gyp.

All the rest were pretty tame because they didn't really get in the way of anything important and you could (in most cases) just dodge around them if need be.

I never saw the Walter painting, Henry at the door, or the cat in the fridge. I probably would have been unnerved a little at the cat one, since my cat scares the hell out of me at nighttime on a nightly basis.

yeah, i hate it when there is a victim right where you need to be, esp. in the bedroom so you go by whenever you come back, or in the laundry room when you need the hole. =0\ i love the shoe haunting though, it's cute. ^_^

I wish the shoe one was animated or something, it's just kind of like "(monotone) oh look, my shoes are in a different spot and there are footprints." To me, anyways.

Is the cat one animated or something? I'm curious even though it'll probably scare the bejeesus out of me.

no, it's not. he just comments, "some mysterious lump of flesh." lol.

nur_ein_tier wrote:no, it's not. he just comments, "some mysterious lump of flesh." lol.

Whoa, creepy. Although I thought the ghost Henry had audio. :\

Good compilation though, I didn't know the TV did anything either.
You've got your good things, and I've got mine.
Top

The most annoying haunting for me, was when the walls would pulsate, like right when i come back to the room or something. I think a rally cool haunting was when
PRIME_BBCODE_SPOILER_SHOW PRIME_BBCODE_SPOILER:
Walters face appears in the painting of the church near the end of the game if you dont keep your room cleansed.

I hated the one with the shoes tracking bloody footprints into the kitchen.
And the guy on the wall in the living room - it took me forever to figure out how to get rid of those two.

All hauntings that hurt you when you get out of bed.
Hopscotch is Civilization!
Top

JIMMY STONE FOR SURE

Well, the Walter as a child shadow [or whatever it was] crying in your closet just plain freaked me out the first time I saw it. Also when I picked up the doll and had it in my chest [not going to spoil it for anyone] that was pretty freaky, anyone who has collected the doll will know what I mean. The Henry zombie one was just lame, and the rest were mildly scary.

Now that you guys speak of the cat in the fridge, I sort of remember being some sort of bloody thing in there, I don't remember if it was a cat, I'll take your word for it, though.

The victim coming out of the wall was disturbing to watch.
Hopscotch is Civilization!
Top

The babies on the wall over the chest freaked me out, I got the doll the first time I played, and put it in there.
Darkness lurks even in the minds of the innocente
Top

I think I have to rank them based on different things.

Most annoying in terms of gameplay? The shadow of the child in the wardrobe, because it would give me damage every time I woke up. It's really hard to place the candle there as well.

Most annoying in terms of scariness? Definitely the victim coming out of the wall in the dryer room. It was so freaking unexpected and made me wanna shit my pants.

The funniest one was Andrew's floating head outside the windows. It didn't really feel like a haunting to me...
I EAT GALAXIES FOR BREAKFAST.
Top

^^ Yes, that's Frank Sunderland, his father. At one point you can inspect the picture in Henry's living room and he explains how it was given to him and how Frank's son and fiance went missing.

That's off the top of my head though and may not be entirely accurate.

As for most annoying haunting, the only one that kind of pisses me off is the haunted chair because it doesn't appear haunted until you use a candle. So you may not know it's even haunted unless you get close to it. Based again, on my memory, it's been a while.
Top

I just watched a compilation of all the hauntings and, really, the ones that are arguably the most perturbing—though not necessarily annoying—are two in conjunction with each other, though not simultaneous.

This alone is fine and all, but when you add it to the much more elusive Walter photo in place of Balkan Church, in which Walter's dead face is staring back at you, you realize, Oh holy shit, Walter literally is always watching me, because his dead body is planted right across from Henry's bed through the wall and staring at me while Henry sleeps.

>the haunted chair because it doesn't appear haunted until you use a candle.<
I don't think I ever experienced this one, either. It's fun because once you light the candle you realize the chair is made of flesh.

Super cool!
This post is the property of its author and is not to be used elsewhere without explicit permission from the author.

Return to “Silent Hill 4: The Room”